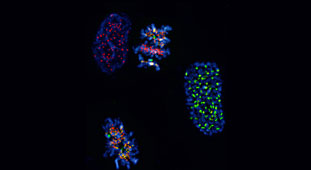 Researchers at the University of Dundee have uncovered the workings of a `traffic light’ control system which lies at the heart of one of the most common cellular processes in the human body.

During our lifetime the cells in a typical human body undergo 10,000 trillion rounds of division. This is why we have evolved intricate signalling circuits to ensure they can do this with incredible accuracy and precision.

It is critical that we understand exactly how these circuits work because they frequently fail in over eighty per cent of cancers, giving rise to errors in division that drive rapid tumour evolution and progression.

Dr Adrian Saurin and colleagues in the Medical Research Institute at Dundee have been examining how one of the vital points in these circuits, the spindle assembly checkpoint (SAC), operates. It is effectively a safeguard which protects against division errors, by monitoring and delaying the process until everything is in place and the cell is ready to proceed.

“When our cells divide, each and every chromosome has to make effective attachments to microtubules,” said Dr Saurin. “A key feature of the SAC is its ability to sense the attachment status of chromosomes and respond by rapidly switching signalling either `on’ or `off’. The molecular basis for this responsiveness was, until now, unknown.”

Dr Saurin and the team identified that two phosphatases play a key role, working in tandem with a pair of protein kinases. The kinases switch the SAC signal ‘on’ which then primes the phosphatases, or brakes, so they are ready to stop the signal as soon as is needed. When the SAC is then ‘off’ the brakes are disengaged so it is free to start up again quickly if required.

“This is an excellent example of how kinases and phosphatases work together to ensure the right type of response at the right time within our cells,” said Dr Saurin. “The concept is one that is analogous to a traffic light control system - individual signalling centres on chromosomes exist in a state that is either on (green), ready to stop (orange) or off (red).

“We propose that the type of coupling that underlies this stop/start control is likely to be repeated in other signalling networks that must be similarly responsive, for example, the DNA damage checkpoint. The key is to identify the specific kinase and phosphatase inputs first and then consider how their coupling allows the optimal response.”

Dr Saurin said the research, the results of which are published in the journal Nature Cell Biology, offered important understanding of a fundamental molecular process that could be relevant for diseases such as cancer.

“Tumour cells tread an incredibly fine tightrope, they need to make just enough division errors to drive their evolution without affecting their viability.” said Dr Saurin. “Too many errors would otherwise be lethal, even for a resilient tumour cell, which could prove to be their Achilles heel. If we can find the route of their problems, we can perhaps exacerbate them and selectively kill tumour cells that are addicted to living life on the edge.

“We are currently investigating whether the SAC control network that we have recently identified may be weakened in tumour cells to cause genomic instability.”