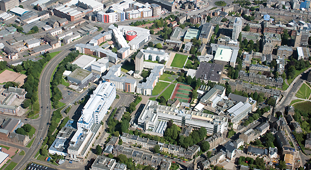 Dundee has become the first UNESCO City of Design in the UK, a prestigious award that recognises the huge contribution the city has made to design worldwide.

The designation, which has previously been awarded to just 12 cities including Beijing, Berlin and Montréal, is awarded after a city meets tough criteria set by the United Nations organisation. Today Bilbao (Spain), Curitiba (Brazil), Helsinki (Finland) and Turin (Italy) have also received the same designation.

These include having an established design industry or industries, a cultural landscape fuelled by design and the built environment, design schools and design research centres, practising groups of creators and designers, and design-driven creative industries.

Dundee’s new title recognises the design innovations that it has contributed to the world, including aspirin, biomedical research that has led to hundreds of new cancer drugs, comics including The Beano and The Dandy, orange marmalade, and video games including Lemmings and Grand Theft Auto that redefined the global entertainment industry.

Dundee joins an exclusive international group of UNESCO Creative Cities – a network of cities identified for their outstanding contribution to areas of creativity such as Literature and Music – and promotes cooperation between them.

Dundee has continually reinvented itself after the collapse of its heavy industries, designing a new future for itself and its citizens. Today the city is rebuilding its expansive Waterfront as part of a £1 billion, 30-year masterplan to design an open, inclusive city of the future.

At the heart of the Waterfront plan is the creation of V&A Museum of Design Dundee, a global home for Scotland’s design heritage. The city is also home to the hugely successful Dundee Contemporary Arts, Dundee Rep Theatre, McManus Art Gallery and Wasps Studios.

Through its two leading universities, Abertay University and the University of Dundee, design has been a prominent area of teaching and research since the 19th century when Dundee led the world in the manufacturing of jute and other textiles.

The father of modern town planning, Patrick Geddes, taught at the University of Dundee from 1888 to 1918. Geddes pioneered the improvement of urban living conditions by taking a biological approach to understanding the complexities of cities – and the health and wellbeing of their residents.

Today, numerous design initiatives are led by Dundee organisations, aimed at creating the next generation of designers across all disciplines – and keeping highly talented graduates in Dundee, creating new ideas and new companies.

Design in Action, Scotland’s national Knowledge Exchange Hub for the Creative Industries, is led by Duncan of Jordanstone College of Art & Design and helps SMEs across Scotland innovate through the strategic application of design. Abertay University trains game designers and developers, and is at the heart of the city’s thriving game development cluster.

Dundee is also home to the first building in the UK to be designed by Frank Gehry, the world famous architect who designed Bilbao’s Guggenheim Museum. Maggie’s Dundee was designed to offer a welcoming sense of calm and sanctuary to people with cancer and their family and friends.

Fiona Hyslop, Cabinet Secretary for Culture, Europe and External Affairs, said: "Warm congratulations must go to everyone who has played a part in bringing this prestigious UNESCO City of Design accolade to Dundee, and indeed Scotland.

“This is a richly deserved accolade and further strengthens the city's growing reputation as a hub of cultural and creative excellence and an international centre for the creative industries.

"Indeed, the Scottish Government has been delighted to award £15 million to the V&A Dundee project, which will create local jobs and contribute significantly to the regeneration of Dundee and its Waterfront, giving the city a world-class design museum and visitor attraction."

“This work delivers immeasurable value to the lives of the people of Dundee, and Scotland as a whole, in terms of cultural experiences, opportunities and the economy. It also attracts people to the city to study, learn, work and live.

“It's absolutely fantastic that the work of the people and organisations behind Dundee's creative and design excellence has now been further recognised by UNESCO, a huge accolade that firmly positions Dundee on an international stage – alongside Edinburgh as UNESCO City of Literature and Glasgow as UNESCO City of Music."

"The city's profile will receive a huge boost and I am certain it will lead to many opportunities for Dundee. I look forward to seeing how we use this status to help take the city forward for the future."

Professor Nigel Seaton, Principal of Abertay University, said: “Dundee is a bright, entrepreneurial city with a rich heritage of design innovation, and with ambitious plans – rooted in design – to regenerate the Waterfront and our communities.

“UNESCO City of Design status is a major recognition of everything Dundee has achieved, from life-saving biosciences innovations to the design of comics and games – many created by Abertay graduates – and of what we can achieve in the future.”

“We are delighted that UNESCO has recognised the heritage and ambition of our city and we look forward to working with the international partners, building new links and strengthening old ones.”

Philip Long, Director of V&A Dundee, said: “Dundee is a city changing itself through design. As part of a highly creative nation we are proud to win this recognition and look forward to joining the worldwide community of UNESCO Cities of Design.”

Stewart Murdoch, Dundee's‎ Director of Leisure and Communities, said: "This is a great outcome for Dundee and a great result for the team which is working on the city’s next ten-year Cultural Strategy. Today we have secured international recognition for Dundee's design credentials and ambitions."

Before today’s awards, the cities holding UNESCO City of Design status were: