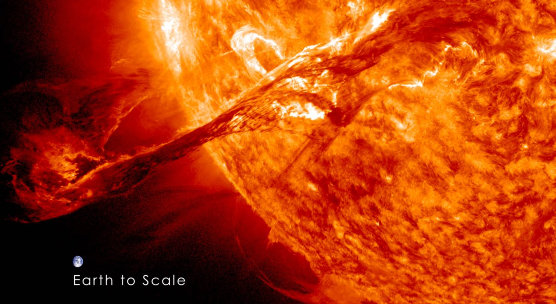 Complex magnetic fields in the Sun’s atmosphere help heat it to multi-million degree temperatures and create explosive events such as solar flares that affect us here on Earth.

Now a major research project led by the University of Dundee is aiming to use mathematics to boost our knowledge of how these magnetic structures are formed and the effect they have.

“There is a growing appreciation of the effect that solar weather, including events such as solar flares and coronal mass ejections, has on the Earth and our atmosphere,” said Professor Gunnar Hornig, of the Magnetohydrodynamics Group at the University of Dundee.

“These powerful explosions lead to major space weather events at Earth, creating the Northern and Southern lights but also having the potential for damaging economic impacts on engineered systems, ranging from satellites and communication systems to power grids and pipelines.

“However, we do not as yet have a deep understanding of the dynamic behaviour of the Sun’s magnetic field, which is a major factor in causing these events. It is becoming apparent that forecasting the occurrence and impact of space weather events cannot rely on static extrapolation models but requires a deep understanding of the behaviour of the magnetic field.”

Space weather has become the subject of increasing scientific scrutiny in recent years as awareness has grown of the effects on Earth of magnetic fields, radiation and particles that have been ejected from the Sun. In the UK, solar storms have recently been added to the National Risk Register of Civil Emergencies and the Met Office now supplies a `Space Weather’ forecast.

The Science and Technology Facilities Council (STFC) has awarded a £700,000 grant to Professor Hornig and Dr David Pontin in the School of Science and Engineering at Dundee, working with collaborators at the University of Durham, for their study “Dynamics of Complex Magnetic Fields: From the corona to the solar wind.”

The project aims to study structure and dynamics in the Sun’s outer atmosphere, extending out to and beyond the Earth, as part of a wider goal in the scientific community to answer the STFC's Science Roadmap Challenge: “How does the Sun influence the environment of the Earth and the rest of the Solar System?”

The Dundee and Durham team will use a combination of numerical simulations and mathematical modelling to unpick the forces behind the Sun’s magnetic fields and their effects.

Importantly, the modelling will take input from the latest generation of solar telescopes, with observations used to validate output, from global simulations of the coronal magnetic field to predictions of the slow solar wind.

“Combined, the results will help to predict and explain events in the solar corona and help us understand some of the basic plasma physical processes that go on throughout the Universe,” said Dr David Pontin, joint lead on the project at the University of Dundee.

The £700,000 grant from the STFC will fund the project for three years and allow the recruitment of two full-time Postdoctoral research posts in Dundee.

The Science and Technology Facilities Council is keeping the UK at the forefront of international science and tackling some of the most significant challenges facing society such as meeting our future energy needs, monitoring and understanding climate change, and global security.  The Council has a broad science portfolio and works with the academic and industrial communities to share its expertise in materials science, space and ground-based astronomy technologies, laser science, microelectronics, wafer scale manufacturing, particle and nuclear physics, alternative energy production, radio communications and radar.

STFC operates or hosts world class experimental facilities including in the UK the ISIS pulsed neutron source, the Central Laser Facility, and LOFAR, and is also the majority shareholder in Diamond Light Source Ltd.

It enables UK researchers to access leading international science facilities by funding membership of international bodies including European Laboratory for Particle Physics (CERN), the Institut Laue Langevin (ILL), European Synchrotron Radiation Facility (ESRF) and the European Southern Observatory (ESO).  STFC is one of seven publicly-funded research councils and is an independent, non-departmental public body of the Department for Business, Innovation and Skills (BIS).

* image shows structures in the million-degree atmosphere of the Sun, as viewed in X-rays by NASA's Solar Dynamics Observatory. Image credit of NASA SDO science teams