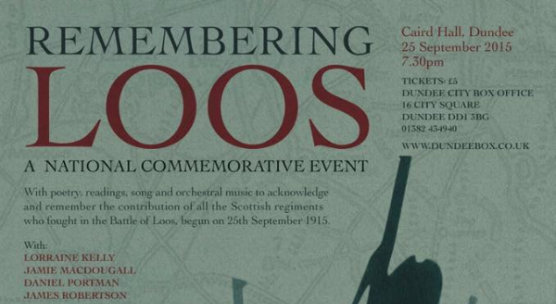 University of Dundee historians Dr Billy Kenefick and Dr Derek Patrick will tomorrow play a leading role in commemorating the centenary of the Battle of Loos, known as Dundee’s Flodden due to the devastating impact of the city’s soldiers.

The battle, which began on 25th September 1915, was the largest fought by the British army that year. Such was the loss of local men, particularly from the 4th Battalion Black Watch, that it became known as Dundee’s Darkest Day.

Presented by Dundee’s own Lorraine Kelly, the ‘Remembering Loos’ event at the Caird Hall on Friday, 25th September has been organised by the Great War Dundee partnership and will encompass elements of poetry, readings, song and orchestral music to create a moving and atmospheric experience as a fitting commemoration of events a century ago.

Dr Patrick and Dr Kenefick co-founded the GWD Commemorative Project and, along with partner groups, are coordinating the city-wide approach to commemorate the conflict. Their research has led to startling discoveries about Dundee’s contribution to the war effort as well as a greater understanding of how this was influenced by contemporary socio-economic conditions and the conflict’s legacy on the shores of the Tay.

Dr Derek Patrick said, “The 4th Battalion fought bravely but took a hammering. They managed to achieve most of their objectives and pushed back the Germans on many occasions — the problem was the lack of artillery power and the reserves were too far back. They ended up losing the positions they had gained and kept being pushed back.

“The Dundee Battalion went into action with 20 officers and 420 men. By the end of the day, 19 officers and 230 men were killed or wounded.”

Around 8,500 British soldiers were killed in the first day of battle and at least 12,000 more were to perish before it came to an end on 14th October.

The Remembering loos event in the Caird Hall tomorrow will begin with a screening of the annual lighting of the war memorial beacon on the Law earlier in the day, marking the start of the battle in 1915. This will be hosted by veterans of The Black Watch.

Groups will perform timeless pieces representing and reflecting the conflict and its casualties. The event will bring unique musical collaborations between the RSNO playing side-by-side with Dundee Symphony Orchestra.

Dr Kenefick said, “The First World War tore the heart out of Dundee. Four thousand young men died, an entire generation of the city’s youth. There was also a remarkable commitment to Britain’s war-effort by the city’s citizens on the ‘Home Front’.

“That is why it is so important to increase people’s knowledge of Tayside’s part in the Great War, to stimulate and record individual stories relating to the war and to preserve these and other relevant material and add them to the city’s heritage collections. As the centenary of the 1914-1918 war unfolds, the Great War Dundee project will continue to construct a picture of the contributions and sacrifices made by the people of this area.”

Remembering Loos takes place in the Caird Hall at 7.30 pm on Friday, 25th September. Tickets, priced £5 each, are available from the Box Office, City Square, or online at www.dundeebox.co.uk