Mine-crafting the future of Dundee’s waterfront 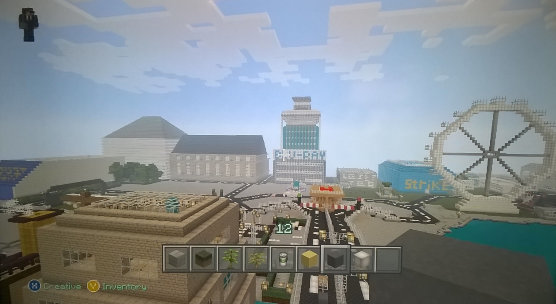 Dundee’s central waterfront is the midst of a £1billion transformation. The project has already proved attractive to the world’s leading architects, including Kengo Kuma, designer of the V&A Museum of Design, Dundee.

Now the city’s schoolchildren will show how it would look if they were set free to design the waterfront, using the gaming phenomenon Minecraft.

The pupils have been working in groups using Xbox and PlayStation 3 consoles equipped with Minecraft, connected to whiteboards in classrooms, reimagining, designing and building their visions of Dundee’s waterfront.

The primary school pupils displayed  their waterfront plans at a showcase event at the University of Dundee’s Dalhousie Building today, Friday June 5th.

“Minecraft has been a huge phenomenon across the world and many parents will be aware of how engaged children can become with it,” said Derek Robertson, an expert in using technology to enhance learning, who is based in the University’s School of Education and is leading the primary schools project.

“We need to understand the digital spaces that children inhabit and how these can help influence their learning. If we want to engage children in subjects like design and the environment then games and applications like this can be a great tool.

“At the heart of this research is an exploration of attitudes towards the digital world that children excel in, the place of games and worlds like those in Minecraft in formal education, and the nature of self-regulation of learners when they play or work in contexts that have cultural value to them.

“The children we have been working with over the past few months have been hugely enthusiastic and they have produced some really great work. Some of it may prove a challenge for the city planners but of course that is the wonder of Minecraft, they can build anything!”

Dundee City Council education convener Councillor Stewart Hunter said, “This is a great project which has inspired our pupils and will help them  to make the most of opportunities in the future.

“I am pleased that this initiative links the major investment in the waterfront with the city’s digital strengths. It really is a look into the future.”

For the primary school project the children were asked to consider a number of factors including:

The project has been funded by a grant from CECHR, the University’s Centre for Environmental Change and Human Resilience.

A major aspect of Derek Robertson’s work has been involved with exploring and articulating just how computer game-based learning can have a positive impact on children’s learning experiences. He has worked as a primary school teacher, an ICT staff tutor in a council education department, a lecturer at the University of Dundee, and as the National Adviser for Emerging Technologies and Learning with Scottish Government’s educational agencies.

He was recently invited along with 49 other educators from across the globe to Los Angeles to a Minecraft Educators Summit to help them establish the most appropriate strategy in which the game could be situated in formal and informal learning contexts. The University of Dundee was the only European academic representative at this event.

Deepak Gopinath, from Town and Regional Planning at the University, is co-investigator for the project, which has been developed with the help of the City Council (Kenny McKeown and Shona McKnight).

Deepak has led the University’s involvement in the TAYplan project with secondary school pupils. The final event in Youth Camp 2015 takes place on Thursday June 11th.

A panel of judges including Professor Rob Duck (Dean of School of Environment), Chris Van Der Kuyl (4J studios, Dundee), Councillor Will Dawson, Allan Watt (Dundee Waterfront Coordinator) and Lucy Thomson, Young Placemaker, will be present to select a school team for the School of the Environment Award for Most Creative Design. A Future Planner Award will be presented by TAYplan to the winning team as well.