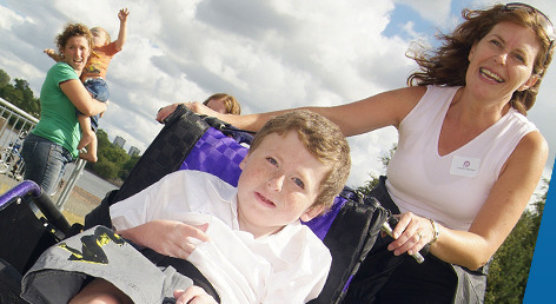 A new Changing Places facility will open in Arbroath tomorrow thanks to the fundraising efforts of local man Grant Speed and his supporters.

In July 2014 Grant took part in a gruelling, five-day 370 mile cycle and raised £10,624 towards a facility for people with profound and multiple learning disabilities in his hometown with Angus council contributing the remaining amount needed to complete the work.

Grant has seen first-hand the difficulties his sister Lois faces finding suitable toilet and changing facilities when she takes her son and daughter, Kien and Kelsey, out for the day. Inspired by the work of PAMIS, the University of Dundee-based charity campaigning for Changing Places toilets to enable anyone to use the facilities in comfort and safety, regardless of the difficulties they face, to be installed across the country, cycled from Leeds to Arbroath.

Grant said, “I have seen the constant battle that Lois and my niece and nephew have when trying to access a suitable changing facility when they are out and about for the day. Having seen the work done by PAMIS and the Changing Places campaign, I wanted to raise money to build a Changing Places Toilet in Arbroath.”

“Lois believes this will not only benefit her son and daughter but many other individuals, families and carers who face similar difficulties and who would also benefit from this type of toilet facility. This is a basic need that should be met to help ensure that people can get out and about more easily.”

Designed to be bigger and better than conventional accessible toilets, these facilities are large enough to accommodate a wheelchair and up to two carers and Changing Places-standard features including an overhead hoist, peninsula toilet, basin and height-adjustable changing bench.

PAMIS and MENCAP are leading the Changing Places, Changing Lives campaign, but there are almost 20 organisations which together form the Changing Places Consortium. They have been lobbying local authorities to ensure that at least one public toilet built to Changing Places standard is provided within each centre of each town with a population greater than 15,000 and within each new larger publicly accessible building and complex.

The campaign has been working for several years to get these standards included in the building regulations. Without Changing Places toilets people with profound and multiple learning disabilities, as well as people with physical disabilities such as spinal injuries, multiple sclerosis and muscular dystrophy are forced to stay at home or their family carers have to resort to changing them on dirty toilet floors.

The Changing Places campaign is aiming to ensure that there is at least one public toilet built to the Changing Places standard in every town centre with a population greater than 15,000 and within each new public building such as shopping centres, concert halls, railway stations etc.