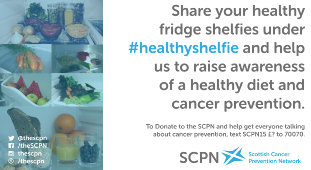 January is a time of year when many people traditionally look to become a bit more healthy, starting out on diets or just eating more healthily as part of their New Year resolutions.

Many may not realise it but by doing so they are taking significant action to prevent cancer. A healthy diet has been shown to have positive benefits in helping to reduce the risk of cancer developing.

Now the Scottish Cancer Prevention Network (SCPN) is asking people to help raise awareness of the benefits of a healthy diet by posting pictures of their fridges - `healthy shelfies’ – on social media.

“Instead of taking selfies we want people to take healthy shelfies and help get the message across that taking care of your diet can have a real impact on helping to reduce cancer risk,” said Annie Anderson, Professor of Public Health Nutrition at the University of Dundee and Co-Director of the Scottish Cancer Prevention Network.

“It is a bit of fun but with a very serious message. People will be trying to be healthily for a lot of reasons this month but it is important they also realise the benefits this will have in stopping cancer.”

The campaign is aiming to be active across social media platforms including Facebook, twitter,Pinterest and Instagram ( see @thescpn)