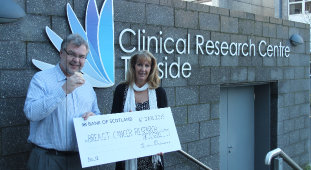 The fantastic fundraising efforts of a Dundee woman have topped £47,000 in aid of breast cancer research, mainly thanks to sales of her homemade tablet.

Mrs Fiona Edwards has been fundraising since 2003 by selling her homemade tablet at running events, nightclasses and through friends and family around Tayside and Fife.

Over the course of 2014 she raised £5500, which she presented to Professor Andrew Evans at the University of Dundee Medical School today (Tuesday January 6th).

“This has been another big year for me and I must say a big thank you once again to all of the people who have bought - and hopefully enjoyed - the tablet,” said Fiona.

“I’m still selling the tablet at running events, youth football, my fitness club, at my Spanish nightclasses at Grove Academy and my 82-year-old mother sells it every week at her church. My husband’s office also run a wee tuck shop and give me the profits.

“Many of my supporters like the idea that the money is raised locally and stays locally supporting local research especially when I say that it has funded a successful drugs trial in the past.”

Taking into account Gift Aid the total amount Fiona has raised is now over £47,000.

Fiona was formerly employed at the University but now works part-time at R M Welch & Son in Monifieth.

“We are hugely indebted to Fiona for the magnificent contribution she makes to supporting cancer research, and breast cancer in particular,” said Professor Evans.