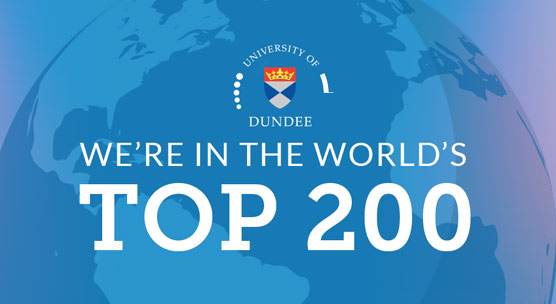 The University of Dundee has been ranked as one of the world’s top 200 universities, just weeks after being named as Scottish University of the Year.

Dundee was ranked 185th in the latest edition of Times Higher Education's World University Rankings, putting it in 31st place among UK institutions. The league table uses 13 measures of performance, grouped into teaching, research, citations, international outlook and industry income, and the University’s performance has improved on last year in every measure.

This year’s assessment noted particularly strong showings in international outlook, in part due to the percentage of international students attending Dundee, and citations, where the University’s impact is in the top 10 per cent worldwide.

The top 200 placing came on the back of Dundee being named Scottish University of the Year in The Times & Sunday Times Good University Guide, which in itself followed a run of successes with it being ranked top in Scotland for student experience in the National Student Survey, Times Higher Education Student Experience Survey, and International Student Barometer.

Professor Sir Pete Downes, Principal and Vice-Chancellor of the University of Dundee, said, “To be named as one of the world’s top 200 universities something that institutions across the globe covet and we are determined to build on this success and fulfil our ambition to become Scotland’s leading university in all the fields in which we choose to work.

“We operate on a worldwide stage and this ranking, being named as Scottish University of the Year and other hugely positive recent surveys will help further bolster our reputation internationally. Our aim as a university is to transform lives, locally and globally, through our top-class research, innovative teaching and a student experience that is being increasingly recognised as the best in Scotland.”