The University Herbarium contains many thousands of plant specimens, including the largest public collection of Angus flora, as well as comparative specimens from other parts of Scotland. It also has some more exotic plants from further afield, such as a fascinating 19th century collection of Darjeeling Ferns.

This website aims to provide an introduction to the various collections that make up the Herbarium.

Origins of the Herbarium

The first University Herbarium was created by Patrick Geddes, the first Professor of Botany at what was then University College Dundee. Lack of resources forced Geddes to abandon his work on the collection, and only a few of the specimens that came to the University during his time survive today. The Herbarium does, however, contain many plant specimens from the 19th century, though these were acquired at a later date.

To find out more about Patrick Geddes and his work at the University. To see botanical teaching charts used by Geddes at the University, visit the Art of Teaching and Plant Life exhibition sites.

Following the gift of the Corstorphine Collection to the University in 1944, a later Botany lecturer, Dr Hugh Ingram, recommenced the active collection of herbarium specimens during the latter half of the 20th century. Thanks to this activity and the addition of other important collections there are now approximately 13,000 specimens in the Herbarium.

All of these are now cared for by Museum Services.

Please click on one of the boxes on the left to see more. 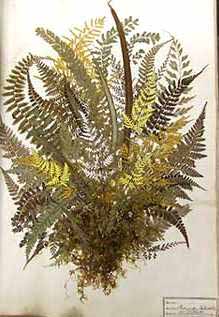 These were mounted by Mrs P Jaffrey and at least one was sent as a Christmas present to her niece Katie Ross Alexander in 1887. They were gifted to the University by Miss Wilkie of Broughty Ferry in 1936.

The Herbarium of the National Botanic Gardens in Ireland also contains a book of Darjeeling Ferns by Mrs Jaffrey. 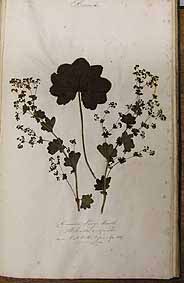 Five volumes containing British plant specimens collected and mounted by Mr William Gardiner (1809-1852) in 1848-9. A Dundee umbrella-maker and poet, Gardiner also published the first detailed account of the Flora of Angus ( then called Forfarshire) in 1848. These specimens are the only ones known to survive from Patrick Geddes's time as Professor of Botany. Four of them were presented to Geddes in 1895 by the bookseller James Thin and the fifth in 1917 by Colonel Simpson. 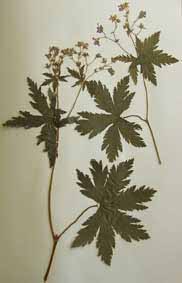 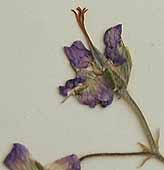 Robert and Margaret Corstorphine ran a printing and publishing firm in Arbroath, but were also enthusiastic amateur botanists. Taking Gardiner's work as their starting point, they aimed to create a complete collection of vascular plants for Angus (vice-county 90). After Robert Corstorphine's death in 1942, Margaret was aided by the local vice-county recorder Sir George Taylor, and in her will she requested that he continue their work after her death two years later. As it turned out, Taylor was made Director of the Royal Botanic Gardens at Kew in 1956 and was unable to carry on, but further research was done by another amateur botanist, Ursula Duncan. Ruth Ingram and Henry Noltie continued this work, and in 1981 published a new Flora of Angus based on this work. The book remains the most up-to-date description of vascular plants for this area.

The University Archives have various papers of the Corstorphines and Sir George Taylor. 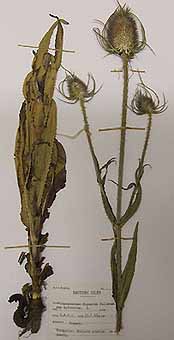 This contains specimens from all over the British Isles, collected in the second half of the 20th century by Dr Ingram during his time as a member of staff with the University's Botany Department. 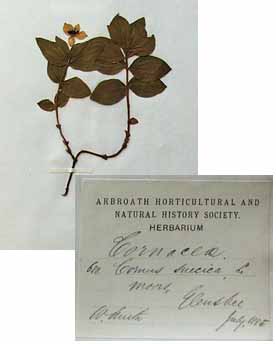 Acquired by the Arbroath Horticultural & Natural History Society (1884-1935), these specimens range in date from the early 19th century to the early 20th century.

They were presented to the University Herbarium after the society was disbanded. 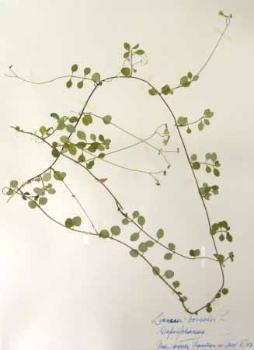 James L Colville (1890-1974) was born in Glasgow where he trained as an ironmonger. He moved his business to Dundee to 1924, by which time he had already begun collecting botanical specimens.

This collection comprises 1,635 sheets of British plants - mostly from the Tayside area collected by Colville or his friend and collaborator Ellis Crapper, but also a large number of English specimens from a Southport collector named F W Holder, with whom he regularly swapped plants. The entire collection (which dates from c.1910s-60s, though mostly 1940s-50s) was acquired at auction by Hugh Ingram, who then donated it to the University Herbarium.

A collection of Ellis Crapper's photographs and notebooks (the latter in collaboration with James Colville) is held in the University of St Andrews - or more information see St Andrews Library - Special Collections. 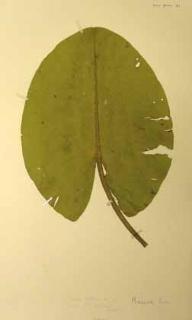 Dr R A Taylor was a lecturer in the Botany Department in the 1940s and 50s, who collected specimens from the areas surrounding Rescobie and Balgavies Lochs in Angus.

This handwritten book does not contain any specimens, but does have hand drawn and coloured representations of the plants, although these are not to any scientific specification. The book was handwritten by Arthur Thomson MA (Cantab), BPhil (St And) and contains good descriptive information on the specimens and includes dates and locations.

The collection has two unrelated books from the nineteenth century which contain mosses. The first (DUNUC 7787) contains mounted specimens and the second (DUNUC 7788) contains individual packets with specimens contained in them.

Accompanying notation states: "This is a collection of 63 grasses which we encountered during the 1978 season which were typical to Minnesota". Specimens come from various locations, among them Rochester, Chester and N. Oaks.

Specimens collected in Madagascar during 1988 by Joan Sutherland of the former Botany Department of the University of Dundee.

Information to be added shortly.

Voucher specimens for research done by Brian S Brookes for his dissertation titled The Vegetation of Dun Moss, which was completed in 1974. The Dissertation is held in the Main Library.