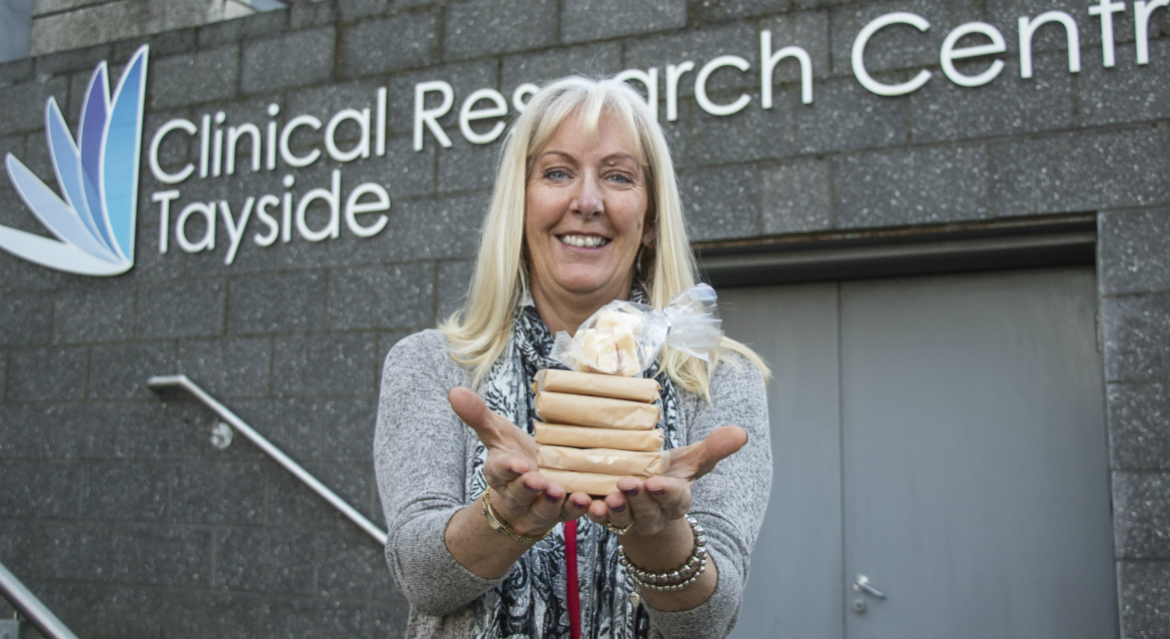 If the UK’s tallest building was built on top of its tallest mountain then the resulting structure would still be dwarfed by a ‘tower of tablet’ that has raised more than £75,000 for breast cancer research at the University of Dundee.

Fiona Edwards has been selling her homemade tablet at running events and through friends and family around Tayside and Fife since 2003 to support researchers at the University. In 2018, she raised over £7,400, bringing her total to £75,490. Fiona will hand over a cheque for the money raised last year at the Clinical Research Centre, Ninewells Hospital on Monday 14 January.

If stacked on top of each other the 15mm high bars would reach a staggering 2,076 metres (6,811 feet). The Shard, the tallest building in the UK, rises a mere 1,016 ft into the sky while Ben Nevis, the country’s highest peak, stands at 4,413 ft, meaning there would be room for another Shard-sized construction on top before the resulting structure came close to matching the height of Fiona’s tablet tower.

“Once again I would like to thank everyone who supports me by buying my tablet or by giving me a spare pound or two for my efforts,” said Fiona. “They have made this possible and their continued support means we have been able to give to breast cancer research year after year.”

Fiona’s tablet-making exploits have helped a second worthy cause this year as her sweet goods have also been sold through Balhungie Farm Shop. Part of the farm shop profits go to helping children in Africa and Fiona’s tablet alone has provided 8000 malnourished children with a meal via the charity ABC Africa.

The money raised by Fiona supports pioneering breast cancer research in the University’s School of Medicine. The latest tranche of funding will be used to support CONDOR, a new study attempting to find out whether a new kind of x-ray test is as good as breast MRI (Magnetic Resonance Imaging) for monitoring how a breast tumour responds to chemotherapy.

Andrew Evans, Professor of Breast Imaging in the School of Medicine and Honorary Consultant Radiologist with NHS Tayside, said, “People like Fiona are vital to breast cancer research and we thank her for another year of hard work on our behalf. We simply could not do the work we do without money raised through charity.”