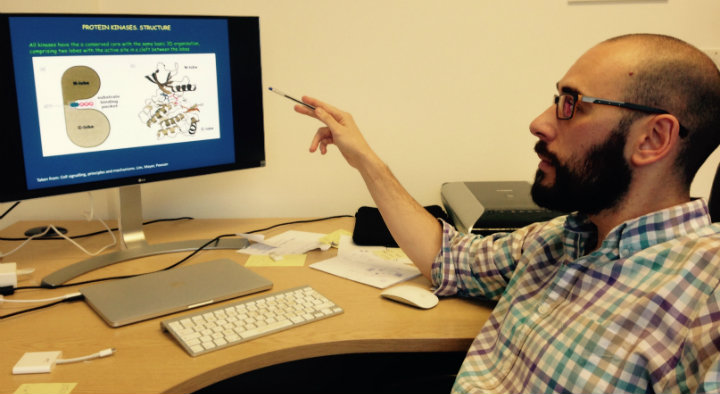 A University of Dundee study has shown for the first time why cannabidiol is effective in treating skin conditions, paving the way for research into its potential as a therapy for other diseases, including cancer.

Cannabidiol (CBD) is a natural non-psychotropic cannabinoid with known antioxidant and anti-inflammatory effects that has become much-hyped as a potential cure for an extensive range of diseases.

CBD has been tested in clinical trials for the treatment of Multiple Sclerosis, Parkinson’s and Huntington's disease and is gaining momentum as a treatment for skin disorders. It is already being used to treat seizures associated with two severe forms of epilepsy and has also been hailed as a possible cancer therapy.

Although the clinical benefits of CBD have been proven, the molecular mechanisms and targets responsible for these effects have until now remained a mystery to scientists.

Now a team led by Dr Laureano de la Vega in Dundee’s School of Medicine have identified the molecular target of cannabidiol in skin cells. This discovery helps explain some of its beneficial effects and could better identify which conditions CBD might be useful to treat.

Dr de la Vega said, “CBD has been promoted as a medical holy grail that supposedly can cure a vast array of conditions including anxiety, depression, inflammation, cancer and acne. Because of this, we wanted to reveal what CBD was actually doing in the cells of our skin, and use that to inform the potential use of CBD for skin conditions.

“Despite proven anti-inflammatory, anti-oxidative, and neuroprotective effects and the multi-billion dollar industry of CBD-based products, its mechanism of action was not known and its general use lacked a scientific rationale.

“We, for the first time, have identified one of its mechanisms of action that can explain some of its beneficial effects in the skin. Now, with this information there is a basis to its use in cream-based products. Importantly, although CBD-based creams might be beneficial against some skin conditions, such as Epidermolysis Bullosa Simplex or to delay skin aging, our study also shows that CBD should be used with precaution in hyperproliferative skin disorders, such as psoriasis.”

Dr de la Vega and his colleagues showed that CBD targets a protein called BACH1 in skin cells. As BACH1 regulates the expression of antioxidant and anti-inflammatory genes, this new mechanism could help rationalise the potential use of CBD in some skin disorders associated to high levels of inflammation. Importantly, as BACH1 has emerged as a therapeutic target for lung and breast cancer, the study raises the possibility of new research focused on the potential use of CBD as a cancer treatment.

“Our findings were very exciting, as they connected CBD with this well-known protective pathway,” continued Dr de la Vega. “This would explain some of the claimed benefits of CBD in skin. Furthermore, the target identified is very relevant not only in skin conditions, but also, in lung and breast cancer.

The research, carried out in collaboration with Professor Eduardo Munoz of the University of Cordoba in Spain, is published in the latest edition of the journal Redox Biology.