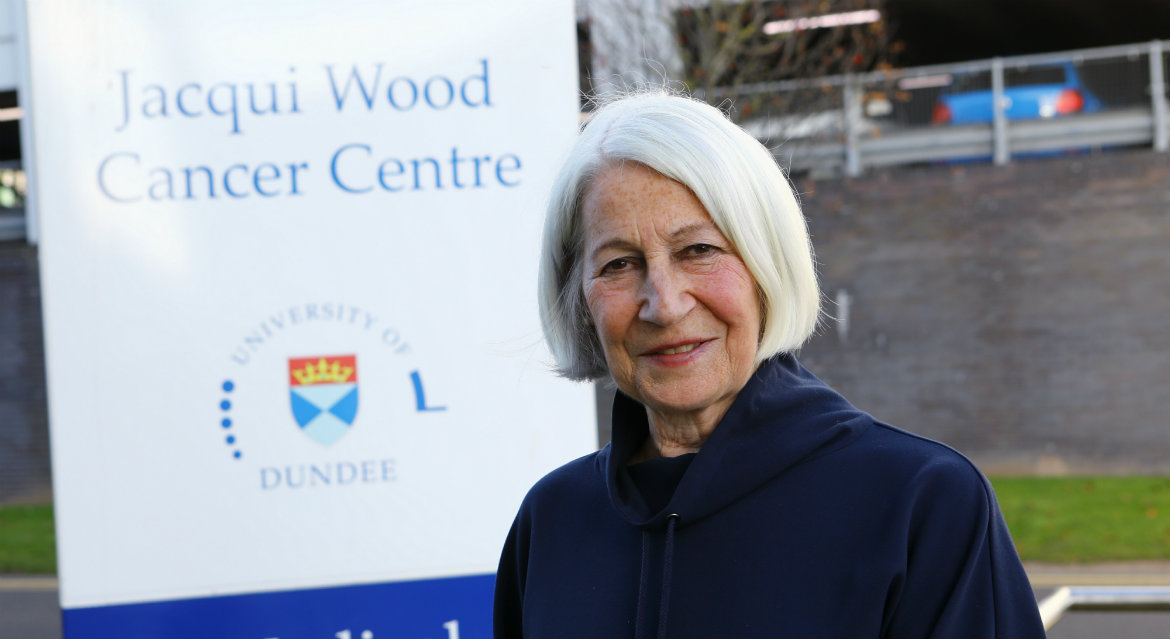 The achievements of Lady Fiona Fraser, who has helped raise more than £22 million for cancer research at the University of Dundee over the past few decades, have been celebrated by colleagues, scientists and members of the public.

A reception in honour of Lady Fraser, who stepped down as Chair of the Ninewells Cancer Campaign earlier this year, took place at the Jacqui Wood Cancer Centre on Tuesday 29 October.

Lady Fraser served the organisation firstly as a committee member then as Vice-Chair and, since 2011, as Chair, overseeing multi-million pound fundraising efforts to bring the best cancer scientists to Dundee and equip Ninewells Hospital with leading-edge research and treatment facilities.

After becoming Chair she led the Jacqui Wood memorial appeal, raising £2 million to establish the cancer centre named in honour of the late NCC founder, and initiated a PhD studentship programme to train the next generation of cancer researchers among other achievements.

Lady Fraser said, “I am incredibly proud to have been involved with the Ninewells Cancer Campaign since its inception. It will be a wrench to leave but nearly 30 years is a long time and it was the right time to step aside.

“Over that time I have had the honour to work with the most wonderful group of people, from the brilliant cancer scientists to the people in the community raising the money and it has been this combination of skills that has made us so successful.

“Much progress has been made in cancer research, diagnosis and treatment but challenges still remain, which is why the Ninewells Cancer Campaign must continue and I am sure it will go from strength to strength under its new leadership.”

Ninewells Cancer Campaign was established in 1991 following an appeal to fund the first CAT scanner for Ninewells Hospital. That appeal had proved so successful it was decided to continue to raise money for cancer research and treatment at Ninewells.

The Campaign was then formed, under the Chairmanship of Dr Jacqui Wood with Dr Pat McPherson as Vice-chairman. These formidable fundraisers went on to champion several appeals over the years, the first of which was to establish the University’s Biomedical Research Centre, a major new department led by Professor Roland Wolf.

Since then, more than £20 million has been raised to support many ambitious projects including the Princess Alexandra Cancer Treatment Centre and the Pat McPherson Centre for Pharmacogenomics and Pharmacogenetics.

Research into personalised cancer medicine and the provision of specialised medical and surgical equipment has also been supported. Fittingly, several staff appointed to the original Biomedical Research Centre are now directing research teams in the new Jacqui Wood Cancer Centre.

Lady Fraser stepped down as NCC chair in June 2019, and has been succeeded by Professor Bob Steele, Senior Research Fellow at the University’s School of Medicine.

“The NCC is a wonderful institution that demonstrates the esteem in which Ninewells Hospital and the University of Dundee are held locally,” said Professor Steele. “I have been involved since 1996 when I first arrived in Dundee and so I know how Fiona has been a tower of strength for the organisation even before taking over the chair. Her efforts were central to the successful completion of the Jacqui Wood Centre – a fitting tribute to Jacqui and her work”

The organisation’s new management, scientific advisory and fundraising committees will be developing priorities for the next NCC appeal in the near future.