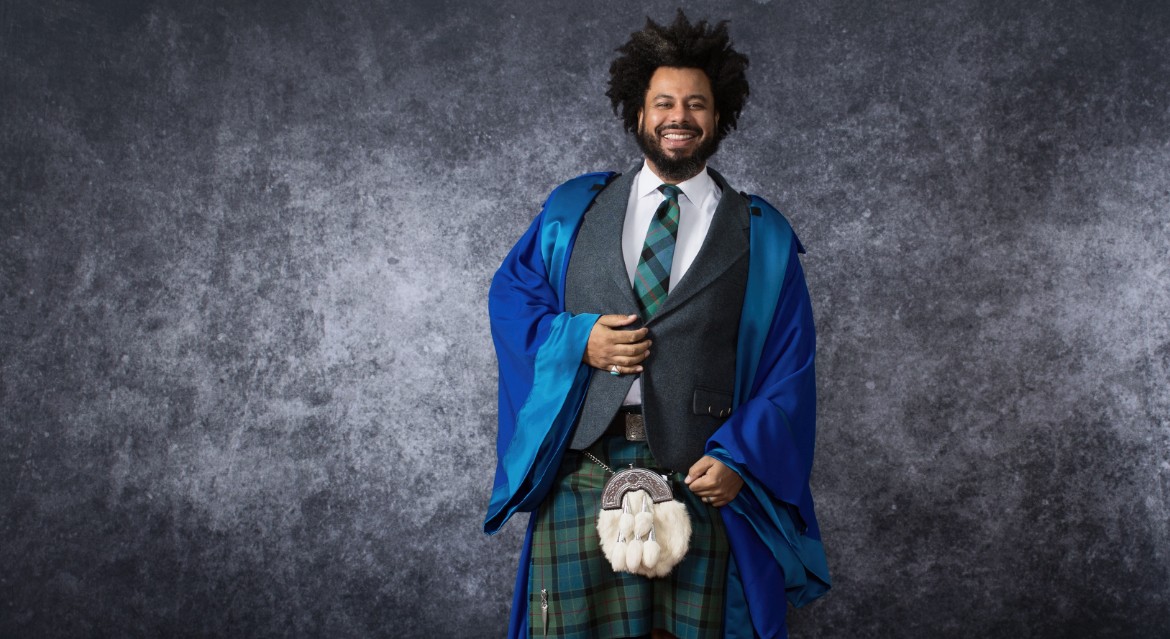 The UK’s most eminent scholar on Halal branding returned to his alma mater this week to receive a prestigious Doctor of Letters (DLitt), the first to be awarded by the University of Dundee in more than a decade.

Known in his field as one of LinkedIn’s Top Voices, Professor Jonathan Wilson is an influencer with more than 20 years specialising in what he calls the ABCDs of Business and Culture: Advertising, Branding, Communications and Digital. During his extensive career, he has published more than 200 pieces of work and received widespread acclaim for his latest book ‘Halal Branding’.

Having first graduated from the University of Dundee with a BSc in Chemistry 1996 and then an MBA in 1998, Professor Wilson received a DLitt for his compendium of published work stretching more than a decade, under the title; “Being Hip and Halal - The Just Balance and the Floating World”.

Professor Wilson said, “Previously, there was a view that Halal (Arabic for ‘permissible’ according to Islam) really just lay within the domain of food sciences and religious studies, as it is largely concerned with dietary laws. Increasingly now however, it is been seen as a lifestyle choice and identity former, in a similar way to the more recent rise in veganism. Therefore, I wanted to explore in more detail what role faith plays in business and consumer choices.

“I was interested in the meaning and messaging behind Halal in our modern, global, post-industrialised, digital landscape today. So alongside covering work from religious texts, legal rulings, and food science, I decided to extend my investigations into business, branding, marketing, popular culture, music, sport, entertainment, tourism, hospitality, fashion, social media influencers, socio-politics, and race.”

This month’s graduation ceremony saw Professor Wilson receive his second doctorate, having already received a PhD in Branding from Brunel University London. Currently working at Regents University London, he said he was excited about returning to the city where his academic career began.

“Dundee has a special place in my heart, because of my Scottish heritage and the graduation ceremony is a great excuse to get my kilt out,” he explained.

“While I was studying at Dundee in the nineties, the vibrant music scene helped me kick start a career as a musician that took me all over the world, on television and onto video games. So I’m looking forward to coming back to where it all began, eat some ‘pehs’, kippers, and of course, Dundee cake.”

The last DLitt to be awarded from the University of Dundee was more than 15 years ago, as the accolade requires candidates to provide evidence of being an established expert in their relevant field, along with a body of publications. They must also be able to demonstrate original and substantial scholarship over a sustained period - indicative of erudition, insight, innovation, imagination and critical balance, with contributions to humane learning.

“He is the embodiment of ‘leading-edge’ in terms of his primary research into business and culture and his reach as an opinion-maker spans a bewildering range from food, ethnicity, religion, travel to Generation-Z.

“It gives us particular pleasure to award this DLitt, which is itself a rare distinction, to one of our own as he already has his BSc and MBA from the University of Dundee.”

Professor Wilson received his degree alongside hundreds of other graduates this week during the University of Dundee’s winter ceremonies.