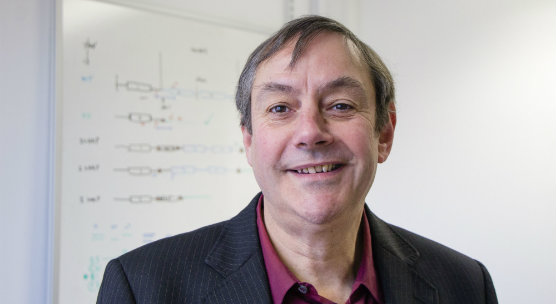 A ‘molecular volume control’ may one day be used to manipulate enzyme activity in order to control the development and treatment of cancer, according to research at the Universities of Dundee and Bath.

The researchers have uncovered new functions of an enzyme called Dual-specificity phosphatase 5 (DUSP5), which will help scientists to better understand how tumours develop.

DUSP5 is known to switch off the activity of another enzyme, called ERK, which controls cell growth in a number of cancers, including colon, lung and melanoma. This would suggest that DUSP5 is a tumour suppressor, but studies have also shown that increased DUSP5 activity is observed in several human cancers.

Using cell-based models, the Dundee-Bath team have shown that the loss of DUSP5 can completely stop cancer cell formation by driving ERK activation to such high levels that it engages a natural protective mechanism within cells that makes them shut down.

An analogy can be made to listening to the radio and being unable to hear comfortably when the volume is either too quiet or too loud. In a similar manner, it appears that increasing or decreasing DUSP5 levels in cells can push ERK activity into ranges that are either too low or too high to cause cancer growth.

The University of Dundee’s Professor Stephen Keyse said, “When the link between DUSP5 and ERK was established it was logically thought that it acted to suppress tumour growth, but levels of DUSP5 are observed to be increased in many human tumours, which doesn’t make intuitive sense.

“What we are now seeing is that DUSP5 does indeed inhibit ERK activity, but sometimes this allows cancer cells to persist and grow by preventing them from engaging natural tumour suppressive responses. This suggests that targeting DUSP5 and thus increasing the level of ERK signalling beyond a tolerable level may offer a new route for combating the progression of some tumours.”

The paper, published in Proceedings of the National Academy of Sciences, highlights the need to better understand how normal and mutant genes interact in tumour cells to predict how they might develop. The next stage for the team is to look at human cancer cells to determine whether DUSP5 has an effect on them.

Dr Jim Caunt, from the University of Bath, said, “These results confounded our initial predictions and show just how important it is to understand how different types of mutation cooperate to influence cancer cell behaviour. An exciting prospect raised by the study is that monitoring DUSP5 could help us predict which types of drugs could be most effective in cancer treatment.”

The research is funded by the Medical Research Council (MRC).