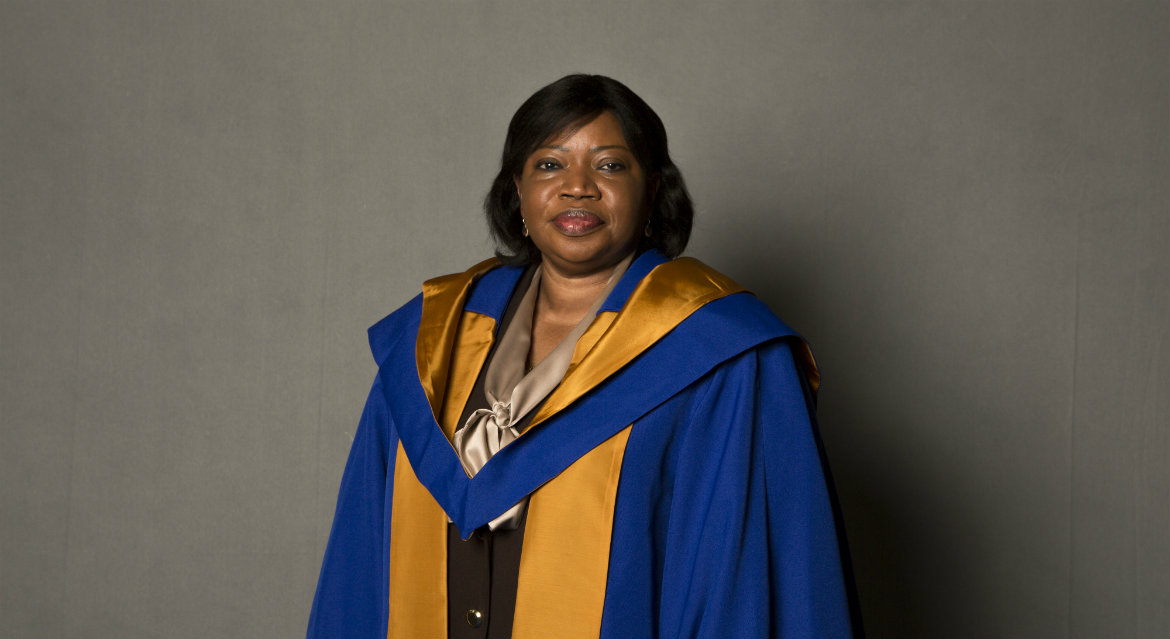 Fatou Bensouda, Chief Prosecutor of the International Criminal Court, today received an honorary degree from the University of Dundee.

Ms Bensouda has led the Office of the Prosecutor at the ICC in The Hague since 2012. Her office investigates and prosecutes cases of genocide, crimes against humanity and war crimes. Her work at the ICC has pioneered the establishment of the Scienti?c Advisory Board with the initial brief to oversee the development of speci?c forensic science related standard operating procedures for investigators.

She received an honorary Doctor of Laws degree at the first of the University’s annual summer graduation ceremonies this morning. Ms Bensouda’s laureator was Niamh Nic Daeid, Professor of Forensic Science and Director of the Leverhulme Research Centre for Forensic Science and Director of research for the Centre for Anatomy and Human Identification.

Ms Bensouda said, “It is an honour to be recognised by such a prestigious university. Since establishing the Scienti?c Advisory Board I have been grateful to Professor Nic Daeid for the advice she has provided with regards to the scientific presentation of evidence in the courtroom. I am pleased to accept this honour personally and on behalf of the Office of the Prosecutor at the International Criminal Court and international criminal justice in general.”

Before joining the ICTR, she was General Manager of a leading commercial bank in The Gambia, her home country. Between 1987 and 2000, she was successively Senior State Counsel, Principal State Counsel, Deputy Director of Public Prosecutions, Solicitor General and Legal Secretary of the Republic, and Attorney General and Minister of Justice, in which capacity she served as Chief Legal Advisor to the President and Cabinet of The Republic of The Gambia.

Ms Bensouda also took part in negotiations on the treaty of the Economic Community of West African States (ECOWAS), the West African Parliament and the ECOWAS Tribunal. She has served as delegate to United Nations conferences on crime prevention, the Organization of African Unity's Ministerial Meetings on Human Rights, and as delegate of The Gambia to the meetings of the Preparatory Commission for the International Criminal Court.

Professor Nic Daeid said, “The work Ms Bensouda has undertaken as Prosecutor of the International Criminal Court in bringing to account the perpetrators of genocide, war crimes and crimes against humanity is world-leading.

“She has committed herself to bring the full force of the law to systematically, consistently and firmly ensure that the perpetrators of these most heinous crimes are punished and that the victims are recognised and listened to. The University of Dundee is extremely privileged to confer this honorary degree.”