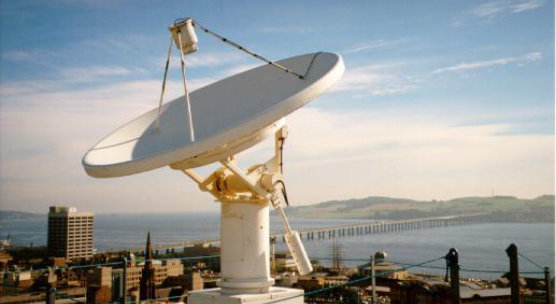 The University of Dundee has entered into an agreement with Antrix Corporation Limited, the commercial arm of the Indian Space Research Organisation (ISRO), to receive data from one of its satellites for use in environmental research.

The Dundee Satellite Receiving Station (DSRS) is one of the main facilities in the UK acquiring data from space and will now directly receive data from the ISRO-built Oceansat-2 Earth Observation (EO) satellite.

Engineers from Antrix/ISRO will visit the University this week to install and test acquisition and generation systems.

The primary purpose of this collaboration is to collect and distribute these data to UK environmental scientists to support marine science research. More broadly, DSRS data are also used in areas such as meteorology and vegetation, snow/ice, volcano and earthquake research.

Historically, data received at Dundee have been provided by US and European satellites. The agreement with Antrix provides an opportunity to broaden the range of satellite data available to users and develop a new partnership with ISRO, another major satellite operator. DSRS will be only the second ground station outside India to receive Oceansat-2 data directly.

Dr Paul Crawford, of the DSRS, said, “We are delighted to be working with the Indian Space Research Organisation, who have made significant advances in the field in recent years. The data from this EO satellite are received and processed by their National Remote Sensing Centre near Hyderabad.

“At present, we will be one of only two sites outside of the Indian coverage area to receive and process the ocean colour image data directly and as such it will be a very useful addition to the other satellites we routinely take data from. Both sides look forward to continued cooperation for future satellite missions.”

The Dundee station has received, processed and distributed data from EO satellites for more than 40 years and maintains an archive of data extending back to 1978 when the first digital weather satellite was launched. Data and images from the Station are also used by scientific, education and operational users as well as the general public around the world. The University’s station has provided the media with some of the most iconic images of significant weather events in recent years.

The addition of Oceansat-2 to the range of data sets is particularly significant for these users due to the satellite’s Ocean Colour Monitor instrument, the first version of which was flown on Oceansat-1 in 1999. ISRO has a long history of developing space technology for the benefit of India and mankind as a whole, as well as working with international partners to further exploit this capability.