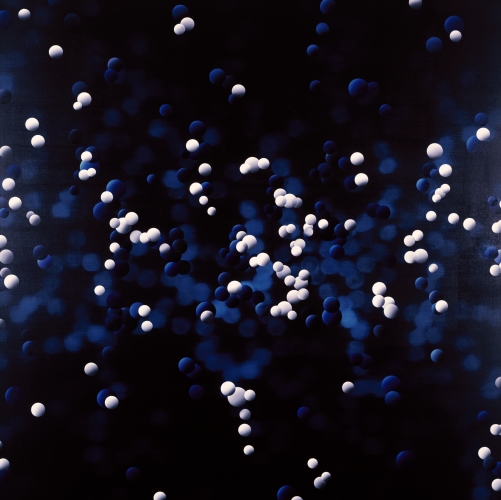 Mark Wright is a lecturer in Fine Art at Loughborough University and has been a professional practising artist since the late 1980s. His work explores biological forms, in particular scientific imaging and the relationships between life and artifice that it engenders.  This painting is part of a body of work from 1999-2000 that was included in an exhibition organised by the Wellcome Trust called Growth & Form, that explored “the influence of scientific thought on contemporary art [and] how art has the potential to influence scientific imaging.”  D’Arcy Thompson was the key starting point for the exhibition, and Mark had been influenced by his work since his student days (one of his tutors was the Dundee-born sculptor William Turnbull, whose early work was also strongly influenced by D’Arcy).

The imagery of this painting suggests cellular forms, but its layers of overlapping images suggest a blurring of what is solid and what is transparent. The technical process of making the work is a major concern to Mark, who uses different paints and techniques to create works that have a three-dimensional quality but one that is impossible to pin down on closer inspection.  The gradual growth and form of the painting itself is of vital importance in Mark’s work, echoing D’Arcy’s own ideas

As well as the purchased work shown above, Mark kindly donated another oil painting, Division, to the Museum. DUNUC ARTS:4418