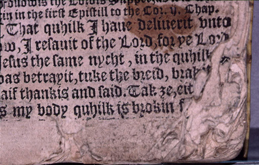 The book conservators at the library conservation unit recently completed the treatment of a rare and valuable Dundonian treasure belonging to the special collections of the Dundee Central Library.

The book is the only copy known to exist of the earliest edition of the Gude and Godlie Ballatis by John Wedderburn of Dundee - the son of a merchant in West Kirk Style. It was published c.1567 by Scott in Edinburgh. The book is also known as the Psalms of Dundee and the Psalms of Wedderburn. Although John is regarded as the principal author of the ballads, his brothers James and Robert Wedderburn are believed to have contributed. The ballads, written in the vernacular and based on popular sacred songs and hymns were used to spread the new faith during the Scottish Reformation.

Femke Coevert, intern at the library conservation unit said: "It was very exciting to treat an item which is so closely connected to the history of Dundee.

The book was in an unstable condition that would lead to further damage through use and the cover and text block had ingrained surface dirt and staining. The vellum cover was physically distorted and one of the alum-tawed leather sewing supports and the sewing thread were broken. The bottom foredge corner of the text block was badly damaged and the first three pages were missing.

After extensive documentation in words and images, we mechanically cleaned the cover and text block. We reduced the distortion of the cover by humidification and controlled drying while we gently eased the spine into shape. The paper repair was carried out with untoned Japanese paper and paste which is used for its strength, flexibility and good ageing characteristics. We reinforced the broken sewing with unbleached linen sewing thread and grafted a new alum-tawed goatskin leather sewing support onto the broken original support to reattach text block and cover."

The book has now been returned to the library and book researchers can apply for direct access. A transcript of the original text is also available for study.