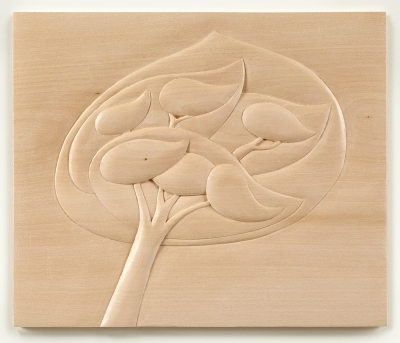 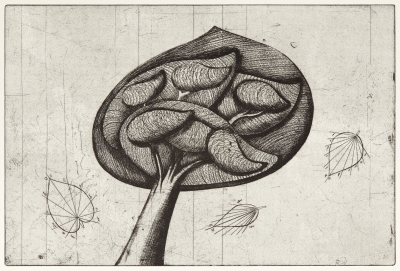 Marion Smith is one of Scotland’s leading sculptors, with major public artworks sited across the UK from Shetland to Southampton (including a significant piece at City Quay in Dundee).  She has also had a successful career managing sculpture facilities, working in galleries, running workshops and teaching in art schools (including Duncan of Jordanstone College in Dundee).  She was elected Secretary of the Royal Scottish Academy of Art and Architecture in 2012. She has exhibited widely in the UK as well as Scandinavia and Japan.

These two works are from a series created by Smith in response to a pencil drawing by George Dutch Davidson in the exhibition Sketching the Universe that was held at the University of Dundee in 2010, our first show exploring artists' responses to the work of D'Arcy Thompson. Davidson was one of the leading artists in Dundee's Celtic Revival movement, and was commissioned by D’Arcy in 1901 to design a series of murals for his study at University College Dundee.  Sadly Davidson died (aged just 21) before the work could be carried out, leaving only a pencil study for one panel, Orpheus and the Listening Animals (now in The McManus: Dundee’s Art Gallery & Museum).  Smith was captivated by the drawing and began to make work in response to one of the trees Davidson had included in it, but also incorporating D’Arcy Thompson’s mathematical ideas and diagrams from On Growth and Form.  As well as the sculpture, Smith also began experimenting with printmaking (a new medium for her) and created United Leaves as a way of exploring further the forms and mathematical patterns of the tree.