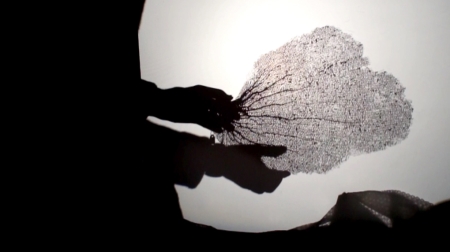 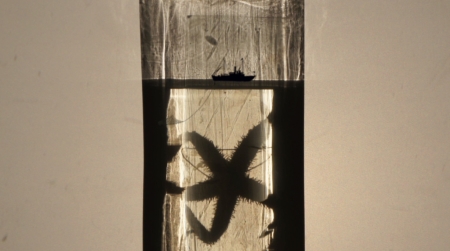 Stills from Aristotle as a Biologist, digital film, 2013

“Most wonderful of all, perhaps, are those portions of his books in which he speaks of fishes” D’Arcy Thompson on Aristotle, 1913.

London-based artist Jennie Pedley specialises in silhouette animation films often created as a result of workshops or residencies.  Many of her projects have involved natural history or medical history, and she has previously undertaken projects with the Wellcome Trust, Millers Dale Nature Reserve and Great Ormond St Hospital among others.

In January 2013 Jennie visited the D'Arcy Thompson Zoology Museum to photograph and film many of our marine specimens behind a backlit screen.  As she explains: “This technique simplifies the image, focussing the eye on the shapes and textures.  Splashes of colour are provided by the preserving alcohol in the various jars.  The uneven surfaces of the glass refracted the light, sending it sparkling around the black silhouettes of spiky starfish and whale embryos."

This inspired Jennie to think about making a film inspired by D’Arcy Thompson’s translation of Aristotle’s History of Animals and a lecture he gave about Aristotle as a Biologist to the University of Oxford in 1913.  In Aristotle’s lagoon “starfish were in such abundance as to be a pest to fishermen, but the scallops had been exterminated by a period of drought and the continual working of the fisherman’s dredge.”  This links with D’Arcy’s work as scientific advisor to the Scottish Fisheries Board, for which he undertook detailed statistical analysis as well as taking his students on marine expeditions in his boat the Goldseeker.