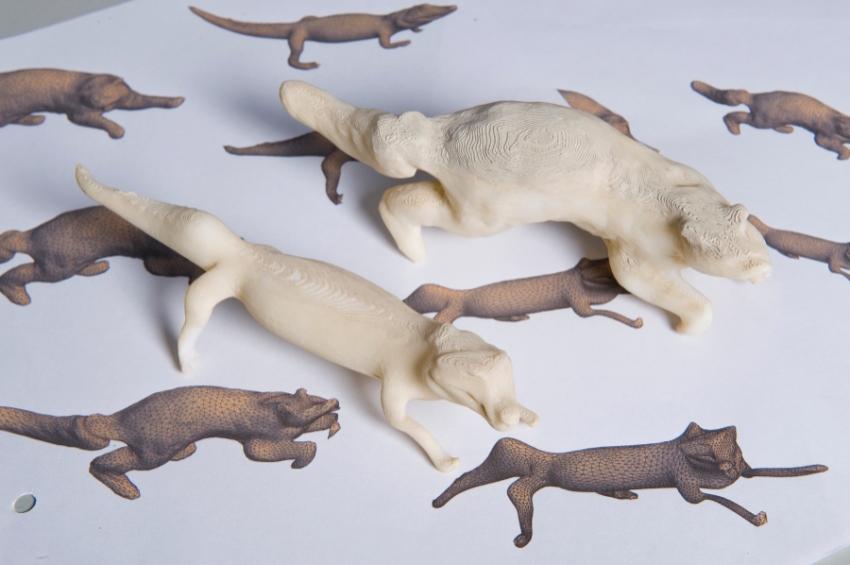 Bruce Gernand was head of sculpture at Central Saint Martins College of Art & Design from 1997-2007 and now works as a practising artist from his studio at Garboldisham, Norfolk.  He has been based in the UK since 1971 and studied at San Francisco State University, City & Guilds of London Art School, the Central School of Art & Design and the Royal College of Art.  Since 1998 he has been involved with 3D computer modelling and his most recent project, Coded Chimera, was funded by the Arts & Humanities Research Council in 2010-11 and involved a collaboration with the Natural History Museum and Cambridge Computer Lab to explore relationships between sculptural form making and biological morphogenesis through computer modelling.  Taking D'Arcy Thompson's transformation diagrams as a starting point, Gernand used scans of animal specimens and new software tools to morph and blend digital meshes of different species to convey qualities of fluidity and mutability, but also linking this modern technology back to ancient ideas of the chimera.  The process of sculptural formation again links to D’Arcy’s own work and in particular the idea of an organism being a diagram of the forces that have acted upon it.

The results of the project were first shown in the Museum of Zoology at the University of Cambridge in 2011 and a revised version of the exhibition was held at the University of Dundee in 2012 (click here for details).  The set of four small sculptures comprise ‘chimeric’ stages in the morphing of a cat to a crocodile (Gernard deliberately uses animals that are culturally related rather than biologically related).  Several morphing techniques were used by the sculptor using a Morph Tool in the Cambridge Computer Lab including ‘warping’ the cat and crocodile computer meshes and using a ‘marching cubes’ algorithm that interpolates a new mesh from elements of the two. This is then smoothed and sculpted digitally and printed as a rapid prototype model using a 3D printer.