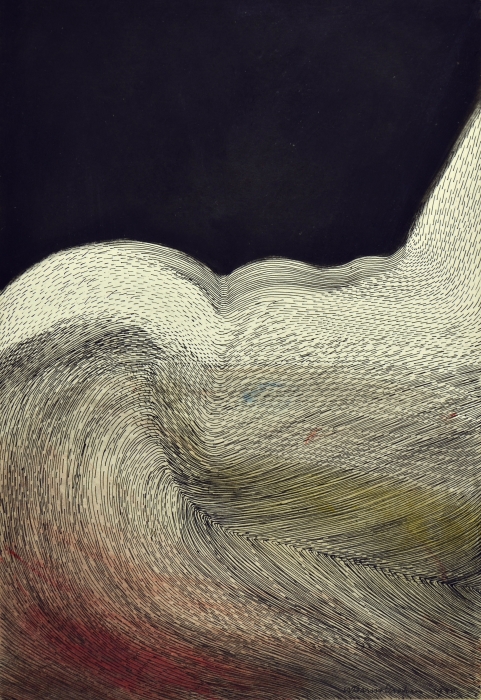 The author and critic Mel Gooding has referred to the drawings of Wilhelmina Barns-Graham as “one of the most brilliantly distinctive bodies of graphic work in twentieth century British art”.

Of all the major 20th-century artists whose work was influenced by D’Arcy Thompson, Barns-Graham is unique in being the only one who actually knew D’Arcy, having met him as a child in St Andrews, where she was raised.  But it was only when she moved to St Ives and was introduced to pioneering abstract artists such as Ben Nicholson, Barbara Hepworth and Naum Gabo that she learned about On Growth & Form and began to be influenced by D’Arcy’s work.  Like the older St Ives artists, his book helped her to recognise the hidden patterns and structures of nature (however apparently chaotic), which she began to explore in her work – she often referred to “things of a kind in order and disorder’.  Her well-known series of mixed-media drawings based on wave formations is a perfect example of this, visualising D’Arcy’s idea that changes in physical form were due to forces acting upon it.

Gooding writes: “These extraordinary descriptions of sea forms might better be described as meditative abstractions and reflective imaginings. They derive from deeply sensed knowledge of the ways in which energy finds its forms.” This is a powerful example, complex, forceful and (unusual for this series) rich in colour, and is a particularly important acquisition for the University of Dundee’s Museum Services, being the first example of Barns-Graham’s work to enter the collection.