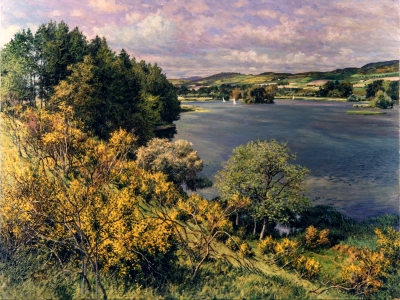 The University has an impressive collection of fine art, focusing mainly on Scottish artists of the 19th, 20th and 21st century.

Much of the collection is available to view on the ArtUK website. Click on the links below:

You can search the entire collection through our online database.

A fully illustrated catalogue of all Dundee's oil paintings as well as various other publications relating to our collectons and exhibitions can be purchased from our online store.

You can see more of our fine art collection by visiting our Exhibitions pages.

Some of our artworks are available for reproduction through Art UK and the Bridgeman Art Library.

An Overview of the Fine Art Collections

Fine Art is one of the major strengths of the University’s collections, with exceptional holdings of paintings, drawings and prints and a smaller selection of sculptural work (over 2,300 pieces in total, excluding the Duncan of Jordanstone College Collection). Scottish art is the main focus, with a representative collection including Raeburn and Wilkie, the Scott Lauder school, the Glasgow Boys, the Dundee Celtic Revivalists, the Scottish Colourists, Colquhoun, Eardley, Phillipson and many leading contemporary artists.

Chronologically, the collection begins with the University’s oldest painting, of Dr David Kinloch by an unknown Scottish artist (oil, 1614). Kinloch was a Dundee doctor who became physician to King James VI and was famously imprisoned by the Spanish Inquisition. Also from the 17th century is a fine Peter Lely of Miss Walpole (oil, c.1669). 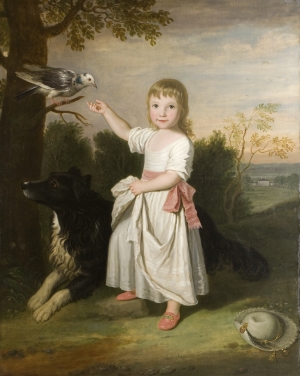 18th-century works include John Glover by John Smibert (oil, c.1720), one of the finest examples of his pre-American work; Rev John Glas (founder of the Glasite Church, at one time the second largest religion in Scotland) by William Millar (oil, 1763); and James Abercromby, Baron Dunfermline as a child by David Allan (oil, 1779 - image left).

Early 19th century works include Wolf’s Crag (oil, c.1820s) by James Thomson of Duddingston, one of his dramatic paintings based on Fast Castle; miniature portraits of sculptor John Steell and his wife by Robert Scott Lauder (oils, c.1827);  Mount Seir, Wadi el Ghar (watercolour, 1839) by David Roberts, painted in what is now Qanawat, Syria; Jews at the Wailing Wall (oil and pencil, 1841) by David Wilkie, one of his last, unfinished works from Jerusalem; and Kincardine Castle, Perthshire (oil, 1845) by Charlotte Nasmyth, one of very few paintings by this important female artist in public collections. Notable Scottish subjects by English artists from this period include Tarbert Castle, Loch Fyne (watercolour, 1845) by Thomas Miles Richardson and Tam O’Shanter (oil. c.1854) by Abraham Cooper.

Later 19th century landscapes and genre subjects include The Orange Seller (oil, c.1850s) by John Phillip; The Dowie Dens o’ Yarrow (oil, c.1860) by Joseph Noel Paton; An Highland Loch (oil, nd) by John MacWhirter; and The Return from Market (pencil, 1878) by William Quiller Orchardson. Work by the Glasgow Boys include Canal (oil, 1895) by William York Macgregor; A Spanish Sunday (Going to the Bullfight) (oil, 1891) by Arthur Melville; and La Japonaise (watercolour, 1894) by George Henry. Major Dundee works from the period include Dundee from the Harbour (watercolour, 1888) by James Douglas (widely acclaimed as the masterpiece of this internationally successful watercolourist); and The Glaive of Light (oil, 1897) and A Sorceress (oil, 1898) by John Duncan, the only oils from his Dundee period to survive in any public collection. 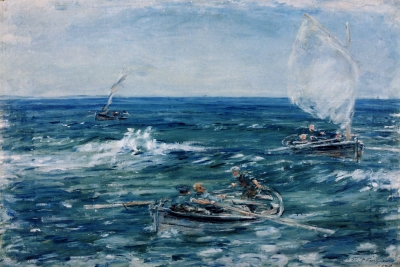 Early 20th century works include the magnificent Lobster Fishers, Machrihanish Bay (oil, 1909 - image right) by William McTaggart; and Lunan Bay (oil, 1911) by David Young Cameron; while our Scottish Colourist paintings include Roses and Still Life (oil, c.1920s) by S J Peploe and Cecilia No 2 (oil, 1912) by F C B Cadell. The Dundee-born artist David Foggie is represented by over 25 works including Mrs Mary Noble (oil, 1929). Most notably, we hold a major collection of over 250 drawings and watercolours by Dundee artist and poet Joseph Lee, popular internationally for his illustrated volumes of Great War poetry.

Post-war paintings include Boy with a Basket (oil, 1949) by Robert Colquhoun; Lt Col Steven J L Hardie by Herbert James Gunn (oil, c.1950); Snow II (oil, c.1961) by Joan Eardley; Interior Presences (oil, 1964) by Dennis Buchan; Flowers in a Basket (oil, 1966) by William MacTaggart; and Visitor, Vietnam (oil, 1968) by Neil Dallas Brown. Late 20th-century paintings include John Byrne’s painting of his children John and Celie (oil, 1985), watercolours by Callum Innes and Adrian Wiszniewski and oils by Moyna Flannigan. In other media, we have a strong selection of box constructions, including works by Fred Stiven (such as Winter Shelf, 1969) and Mateusz Fahrenholz (such as Horizon, 1991). We also hold key parts of Pete Horobin’s pioneering Attic Archive, including the multi-part work The Accessibility of the Art Object (mixed media, 1977-9). 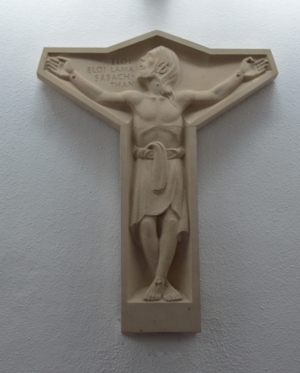 Over the years the University has also commissioned several major works. We have the most extensive selection of portraits by James McIntosh Patrick and Alberto Morrocco of any public collection – five by Patrick (plus one on long term loan) including Professor Angus Fulton (oil, 1947) and seven by Morrocco (plus two on long term loan) including HM The Queen Mother (oil, 1972). Three other commissions are particularly worth highlighting. High Summer (oil, 1977) by Robin Philipson is a mural commissioned for Dundee College of Education. In 1983, Hew Lorimer was employed to create a large-scale sculpture of Christ on the Cross (completed 1986 - image left) for the Chaplaincy. Most recently, in 2014, multimedia artists Thomson & Craighead were commissioned to create Stutterer, an instructional artwork described by the artists as a poetry machine that uses the human genome like a music score to play back a self-assembling video montage spanning the thirteen years it took the Human Genome Project to complete the first documented human DNA sequence.

Although Scottish art is the principal focus of the collection, it is also worth noting some important works held by artists from elsewhere in the UK and beyond. These include some notable Pre-Raphaelite and related works including Delia (pencil, c.1867) by Dante Gabriel Rossetti, Pleasant Dreams (oil, 1876) by Emma Sandys, Poppy Time (gouache, 1893) by Walter Crane and The White Mayde of Avenel (pastel, 1902) by Frederick Sandys. The Mocking of Christ (gouache, c.1952) by Edward Burra is one of his most ambitious works on paper, while Enzo Plazzotta's multifaceted bust of former rector Peter Ustinov (bronze, 1968) is one of the highlights of our sculpture collection. We also have the largest collection of work by situationist artist Ralph Rumney in any public collection (19 paintings, photographs, prints and mixed media work) and the largest holdings of Tasmanian-born painter David Armitage (10 paintings).