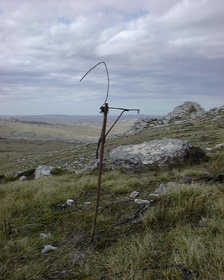 An exhibition at the Imperial War Museum, London, (23 March to 23 June 2002) mounted to mark the twentieth anniversary of the Falklands conflict, contains interactive, digital and print-based media by Roland Ashcroft, Gareth Fisher, Gary Gowans and Elaine Shemilt of the University of Dundee.

These artists are of the same generation as those who fought on both sides in 1982. Their work is a response to their own poignant memories of twenty years ago as well as their feelings when they saw first hand the traces of war that remain on the Falkland Islands. All four artists belong to Duncan of Jordanstone faculty of art and design at the University of Dundee.

Using sound together with historic and contemporary photographs, collaged with watercolours, print media, found items and computer-generated imagery by all four artists, they have worked together to create an interactive programme that will be projected onto one wall of the gallery. Original works by all four artists will also be displayed.

Twenty years after the 1982 Anglo/Argentinean conflict Elaine Shemilt reflects, the remaining evidence of the war is still visible in the landscape: minefields, war debris, war graves suggesting the contrast of past and present that is integral to her work. During her visits to the shattered refrigeration plant at Ajax Bay, the site of the 1982 field hospital, she recorded: "I have felt as though the ghost of my self twenty years ago was haunting those ruins. I am also aware that my sons have reached the age when many of those young men involved in the fighting lost their lives." This is the essence of " Fragments" which is the series of images made for the Imperial War Museum Exhibition 'Traces of Conflict' in 2002.

For Gareth Fisher it was Mount Harriet, where personal belongings - clothing, shoes, a book, tins and bottles, as well as rusting armaments lie undisturbed. "The ruins of military architecture and installations, wrecked vehicles and equipment are the antithesis of sublime; the new modern graveyards, they are awesome reminders of death and loss, more potent than official memorials." His works take the form watercolours, underpinned with drawing, which sub consciously try to evoke broad visual panoramas from Mount Harriet. Sometimes almost abstract, but pulled back to a realistic reference point, by collaging a photograph from the location into the work.

Families come and leave flowers, photographs and personal mementoes attached to the simple white wooden crosses that mark the graves of Argentine soldiers. Roland Ashcroft found the Argentine Cemetery very moving because it was so openly about grief and loss. He was also struck by contrasts, the military and civil communities, the barren landscape and wild southern ocean, the debris of war and the growth of a community and the contrast between life and death focused by the tragic loss of hundreds of British and Argentine men. His photographic work involves extremes and contrasts and hints at their reaching out towards each other.

Garry Gowans' perspective comes from how he experienced the conflict remotely at home in Scotland; "I watched the war from my living room, in pubs, cafes and shop windows - on television. Initial disbelief turned to incredulity as intermittent incidents escalated to full blown conflict." His work juxtaposes television coverage of the events with animated imagery referencing key incidents. Christian iconography reminded him of common aspects of faith, loss and remembrance whilst imagery collected from his own trips to the islands points to the harsh, yet beautiful and ecologically unique environment./ENDS