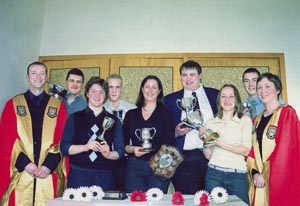 The achievements of the University's most outstanding sports men and women were recognised at the 2002 Blues and Colours ceremony.

The awards mark the success of students who have played for their national University team, or who have otherwise excelled in their particular sport, from badminton and basketball to rowing and rugby.

A special ceremony was held in the Tower building's river room, where the Principal presented certificates to the 50 students whose efforts have helped to create the university's fine reputation in the sports field. Amongst those honoured were University sportsman of the year, boxer Chris McLung and sportswoman of the year, judo champion Louise Porter.

Pictured here are sports union president Stephen McLean; Martin Bunyan, captain of the boxing club which received the club of the year award; judo champ Louise Porter, sportswoman of the year; boxer Chris McClung, sportsman of the year; (white shirt); Sarah McConnell who accepted the most progressive club of the year award on behalf of the boat club; Tim Langham, club enthusiast of the year (Sunday League); ladies' hockey player Linsey Thomson for the most outstanding achievement outside university; men's hockey player Aaron Mills, the most distinguished first year and Jayne Speers, vice president of the sports union.

Sports Union president Stephen McLean said, "This is the first Blues and Colours ceremony to take place at the University for a number of years. We wanted to bring it back into being because the outstanding success of many of the University teams, as well individual sports men and women, should not go unrecognised."